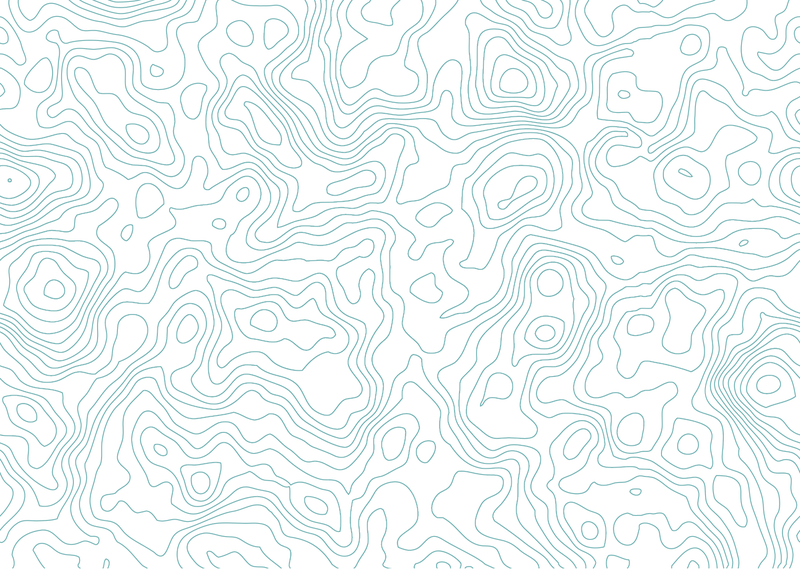 At Atelier Land05, we help our clients to turn their ideas, ambitions and needs for urban projects into reality.  We turn our creative flair to shaping the landscape in public and private sectors, from intimate private gardens to open communal spaces.  Our aim is always to benefit the community by connecting people with nature, to increase enjoyment of their local environment and provide a sustainable, welcoming place that will be used by generations to come.

We take responsibility for all aspects of a project; taking the time to understand the needs of the client and community, creating inspiring designs, providing advice on materials and skills sourcing, preparing project documentation, advising on the selection of the construction company and liaising with all parties to ensure a successful project delivery.

The team at Atelier Land05 has the experience and expertise to add value at every stage of a project.  We employ a rigorous design process which includes presenting comprehensive proposals, preparing essential documentation for planning consent, meeting regional planning criteria, detailed project design and tender documentation.  Further to this we provide technical supervision of the project delivery. We co-operate with Architects, Engineers, Ecologists, Sociologists, Artists and Stakeholders, to be certain that our designs achieve our clients’ objectives and engage the community.

Meeting functional, social and economic needs with aesthetic, natural and enjoyable designs is a quality that Atelier Land05 brings to every project.

Martina is a certified landscape architect and founder of Atelier Land05, following 15 years in the industry. In 2001 she took an internship with the Wageningen University  in the Netherlands in the International Course of Landscape Design and Planning.  In 2002, she completed her postgraduate degree at Mendelova University in Brno, Faculty of Landscape Architecture in Lednice na Moravě.

Between 2001 and 2005 Martina cooperated with the landscape studio ‘terra florida’. In 2005 she co-founded the Atelier a05 practice and worked there as a partner until 2015. In 2016 Martina established her own landscape architectural studio ‘Atelier Land05’.

Over the course of the last fifteen years Martina has worked on many projects in the public as well as in the private sector. She was a member of several competition committees, for example the Revitalization of the Štvanice Island in Prague in 2009 and the Best Village in Central Bohemia Region in 2010.  Martina was also a member of the Chamber of Czech Architects committee awarding prizes for the best disseratation. She was involved in evaluating student dissertations and portfolios at various Universities teaching architecture.  She gave a presentation speech at the event “Plzeň – the European City of Culture” named - “The Garden as the Public Space” and took part in organizing the International Exhibition of Landscape Architecture in Visegrad Countries.

Martina received her postgraduate degree from the Faculty of Landscape Architecture in the Czech University of Life Sciences in Prague.  In 2019 she successfully completed her studies towards PhD degree at the same University. In her dissertation work she used aerial photography to reveal historical traces of the original landscape composition.

In 2012 Martina took an internship with the landscape studio Bruns-Park in Moscow, owned by Ilya Mochalow and Partners.

Between 2012 and 2015 she cooperated with several landscape studios. She worked on variety of landscape projects such as private gardens, city and town squares, parks, school grounds and other public spaces as well as revitalization projects for villages in the Czech Republic Bohemia region.

In 2013 she was awarded 3rd place in the architectural design competition for the ‘Old Post Office Bechovice – Courtyard’. In the same year she received the Josef Hlavka Award from Josef, Marie and Zdenka Hlavka Foundation; this prize is awarded each year to the best undergraduate and postgraduate students. In 2016 she was nominated by the Czech Landscape and Garden Society (SZKT) to be a member of the committee selecting the Best Park of the Decade.

In 2016 Martina joined Atelier Land05. Her current work consists of a variety of public landscape projects with the main focus on revitalization of the countryside and design of public spaces.

She has taken part in many national and international workshops and competitions. She has given lectures to students and participated in educational programmes about landscape architecture. In 2017 Martina took part in organizing the course 'Green Financing' and in 2019 the course 'Tools for Landscape Planning' initiated by the Czech Chamber of Architects. She also publishes articles in professional magazines.

During his studies Ondřej worked in a landscape studio in Roznov pod Radhostem. In 2014 he was a member of the team working on a project of revitalization of a park in Branky village, as a designer of the park design.

Ondrej is a member of the Czech Landscape and Garden Society (SZKT).

During her studies she was interested mainly in floristry and decorated interiors for several big social events. She also got valuable practical experience from work in a few garden companies.

After graduation Marketa worked in a firm decorating interiors of office buildings.

In 2018 Marketa decided to join Land05 team to work mainly on projects of revitalization of public spaces in big cities.

Martin completed his Masters degree at Mendelova University in Brno, Faculty of Landscape Architecture. During his studies, he had gained valuable practical experience in Germany and Portugal and furthermore during his internship placement at Van Hall Larenstein University of Applied Sciences in the Netherlands. After completing his qualifications Martin was offered a position at Landscape studio Panorama Paysage, Paris- Montreuil, France. At the end of 2018, he decided to develop his creative talent in Land05. Martin’s main responsibility at our Studio is the design of family gardens where he can apply his great interest in the flower arrangement and gardening.

Daria graduated with Masters degree from the Czech Technical University in Prague, Faculty of Architecture. During her studies she took several internships in architectural studios. After Daria completed her studies, she got three-year experience working on administration building DOCK IN (Prague – Liben). Due to her interest in design of public spaces, Daria joined the Land05 team in 2019, where she works mainly on city projects.

Eliska received her master degree at Mendelova University in Brno, Faculty of Landscape Architecture in Lednice na Moravě. She finished the master study working on her thesis about landscape architecture of a small village in Central Bohemia

During her studies Eliska took internship in a garden company, where she worked on projects of private gardens.

Julie received her master degree at Mendelova University in Brno, Faculty of Landscape Architecture in Lednice na Moravě. She is currently studying towards her PhD degree at the same University. Her dissertation work aims to develop a new approach for the terrain modelling.

She took an internship with the Wageningen University in the Netherlands in the International Course of Landscape Design and Planning and spent almost a year working in gardens at Leslie Castle in Ireland.

Since mid-summer 2019 Julie has been working in Land05 and her task is the graphic design for a wide range of landscape projects.

Martin graduated from the Czech Technical University, Faculty of Electrical Engineering, School of  Economics in 1998. During his more than 15 year career he has been in various business and managerial positions in several multinational corporate organizations. He has gained experience mainly in business marketing and law in the Czech Republic as well as in the EMEA region. In 2016 he has joined Atelier Land05 and is responsible for marketing, sales, contracts and office management.

2nd place in the architectural competition for the Central Park in Most (together with gogolak + grasse). More...

3rd place in the architectural competition for the Park at Synagogue in Trnava.

3rd place in the architectural competition for the new administration building of Forestry Czech Republic (together with DAM Architects). More...

1st place in the public urban-architecture competition for revitalization of Husovo Square in Lysa nad Labem (together with XTOPIX architects). More...

1st place in the competition ‘The Most Beautiful Garden’ at The ‘Bohemia Garden’ Trade Fair in Litomerice (in cooperation with Jana Pyskova and Ales Kurz). More...

1st place in the competition ‘The Most Beautiful Garden’ at The ‘Bohemia Garden’ Trade Fair in Litomerice . More...

1st place in the public urban-architecture competition “North Terraces in Hradec Kralove” (atelier a05 together with Projektil Architects). More...

3rd place in the National competition “Garden of the Year” organized by the Federation for Construction and Maintenance of Greenery. The award was given for the garden in Kraluv Dvur – Pocaply. More...

Dean’s award of the Garden faculty at Mendelova University for the perceptive reconstruction of the Friendship Park in Prague. More... 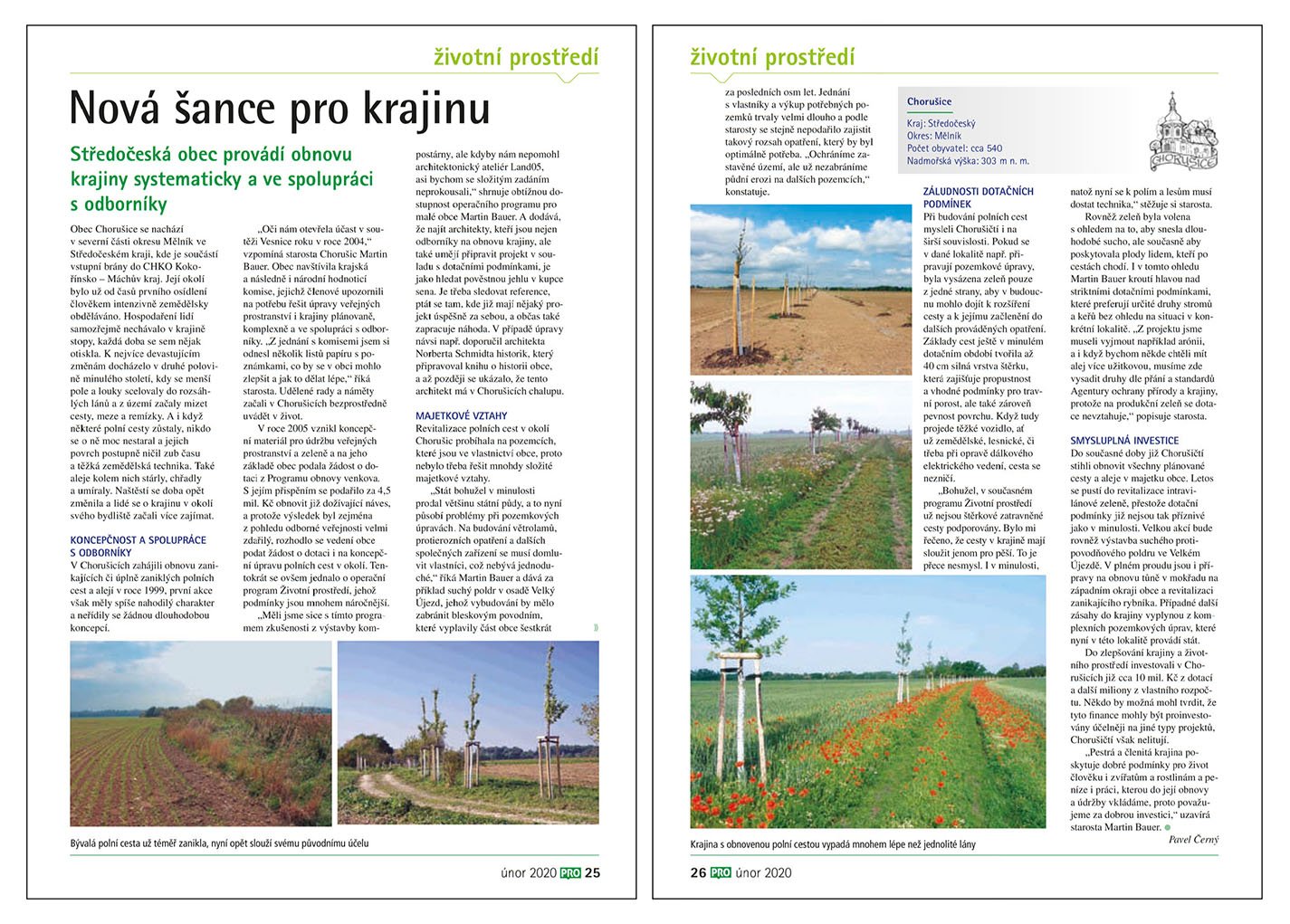 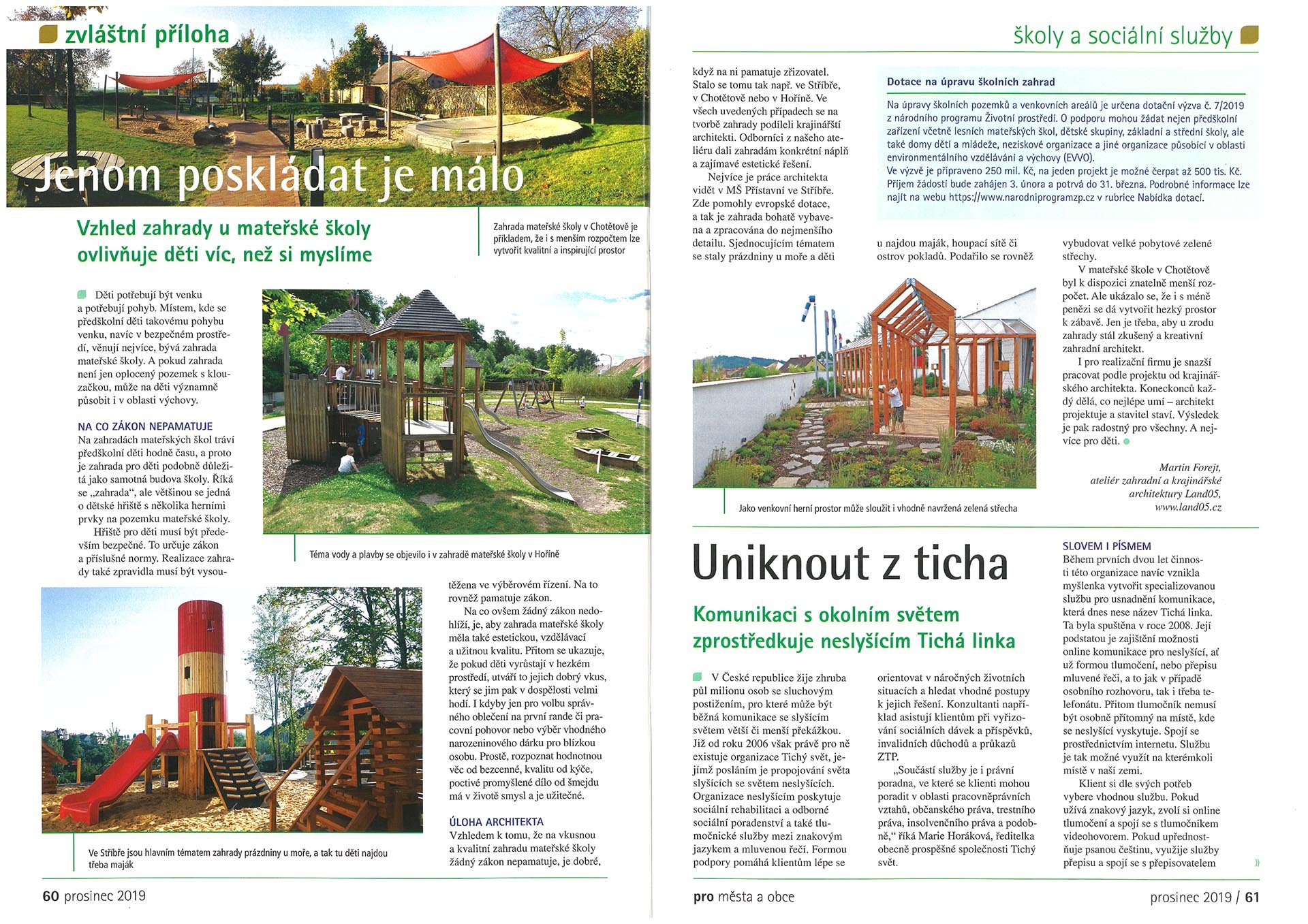 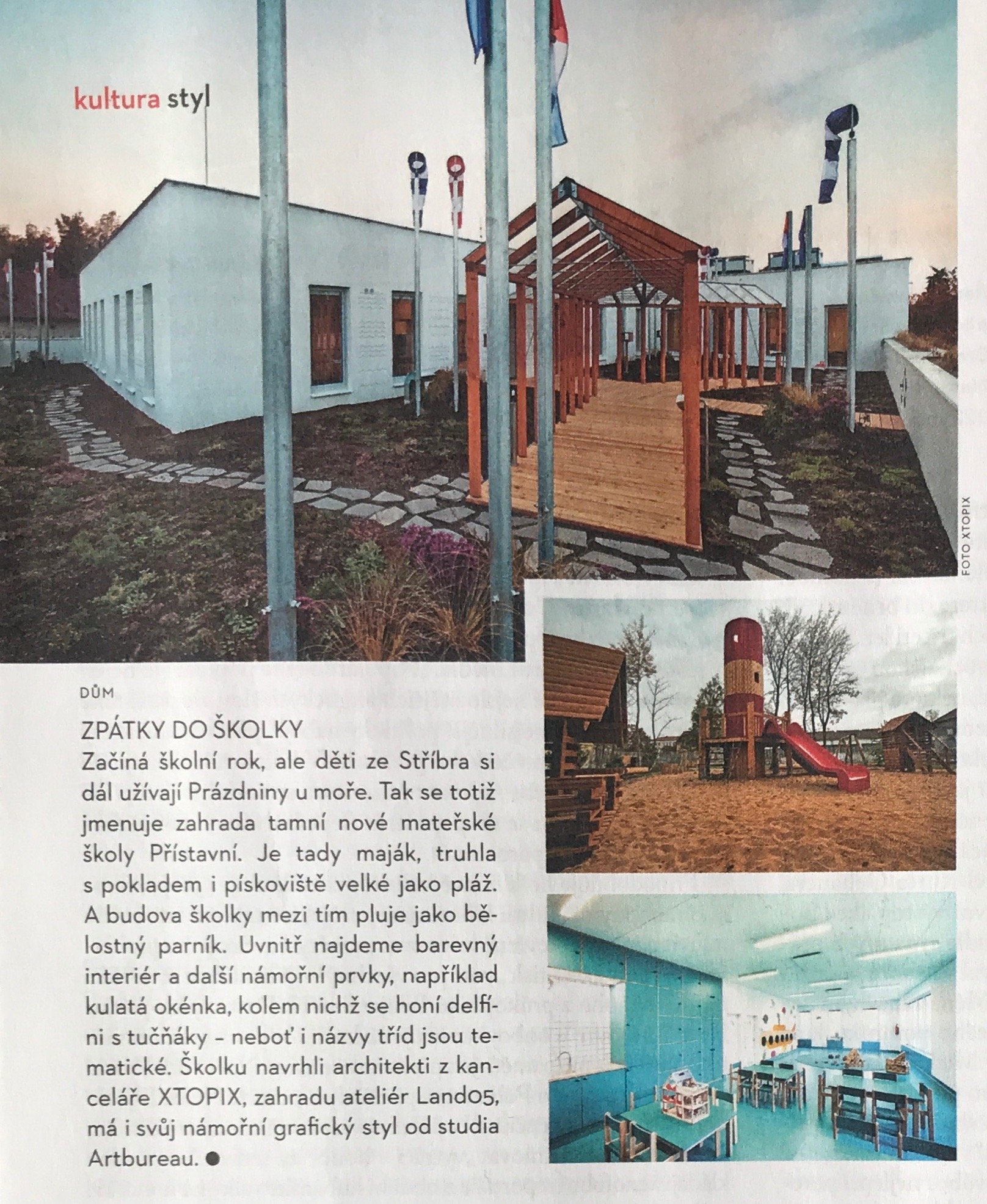 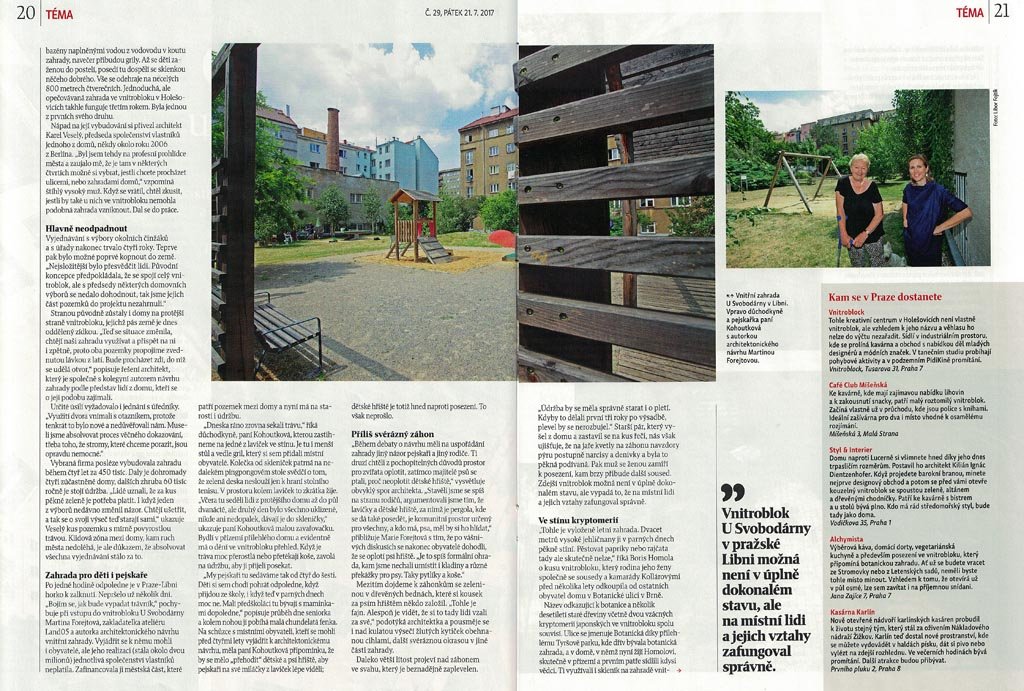 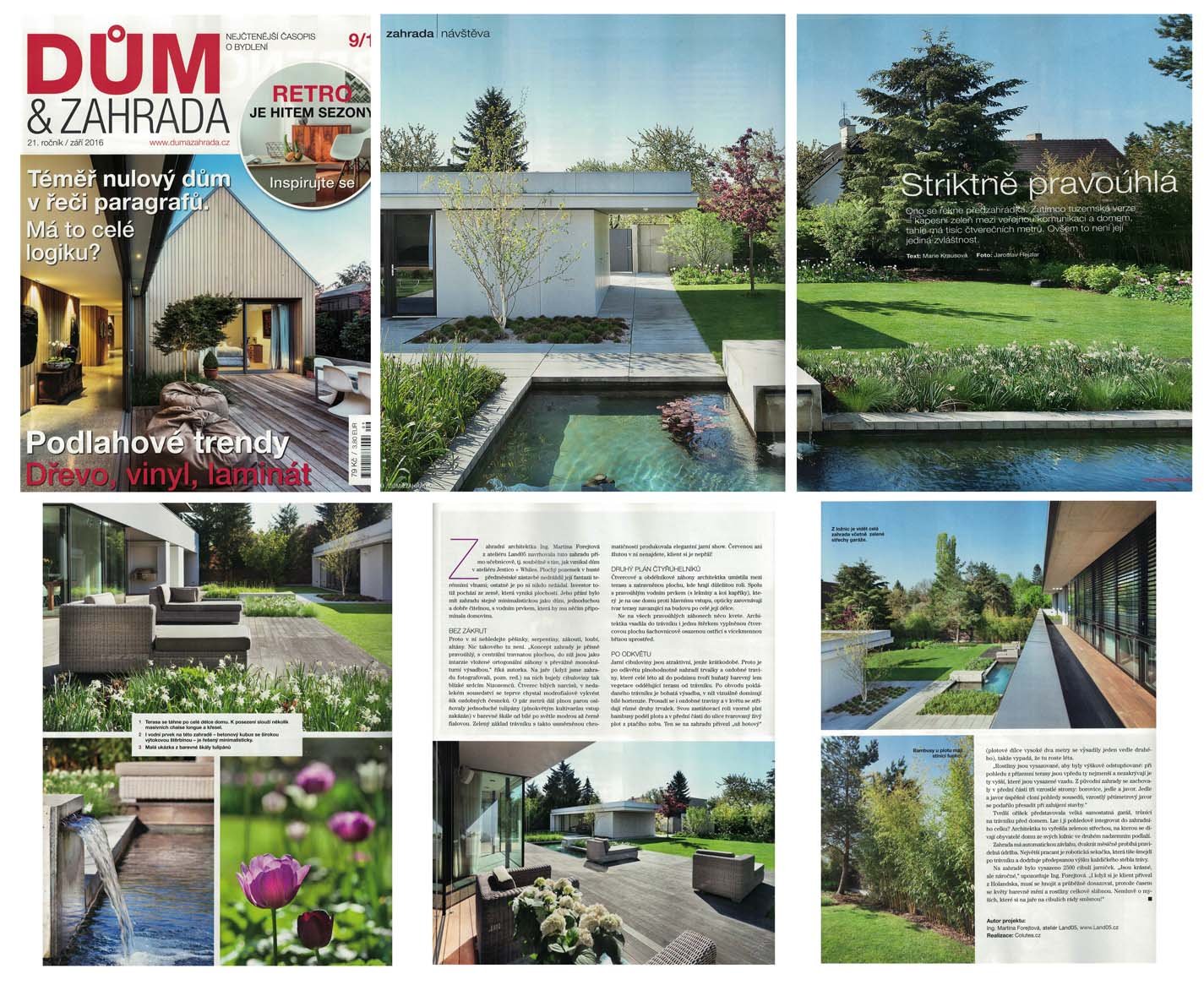 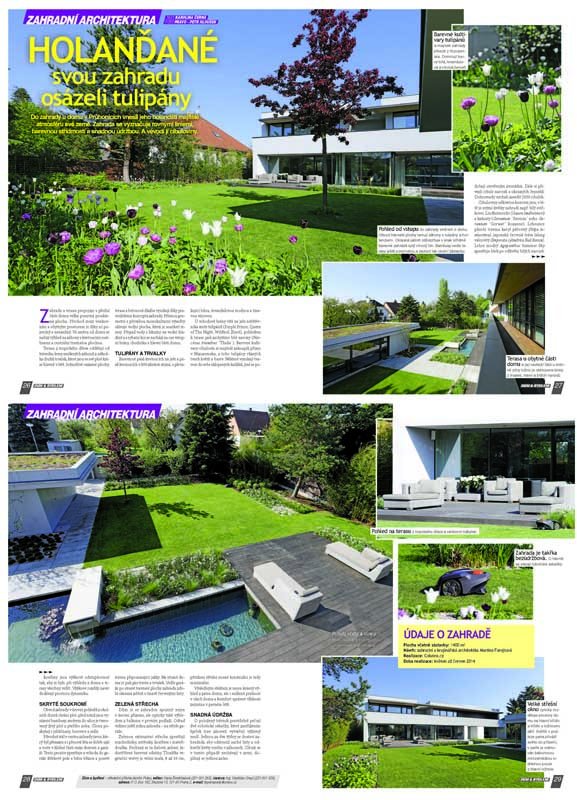 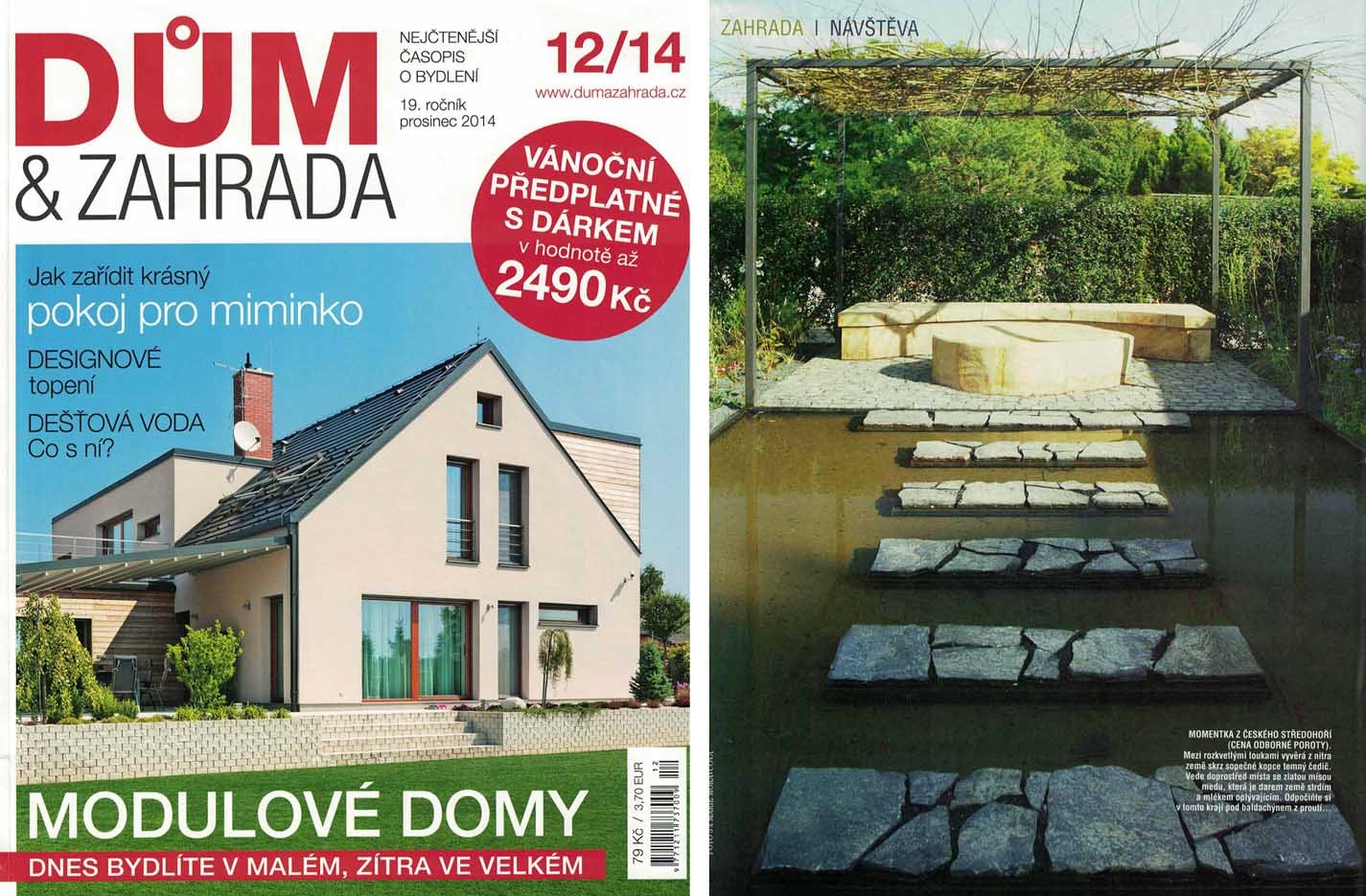 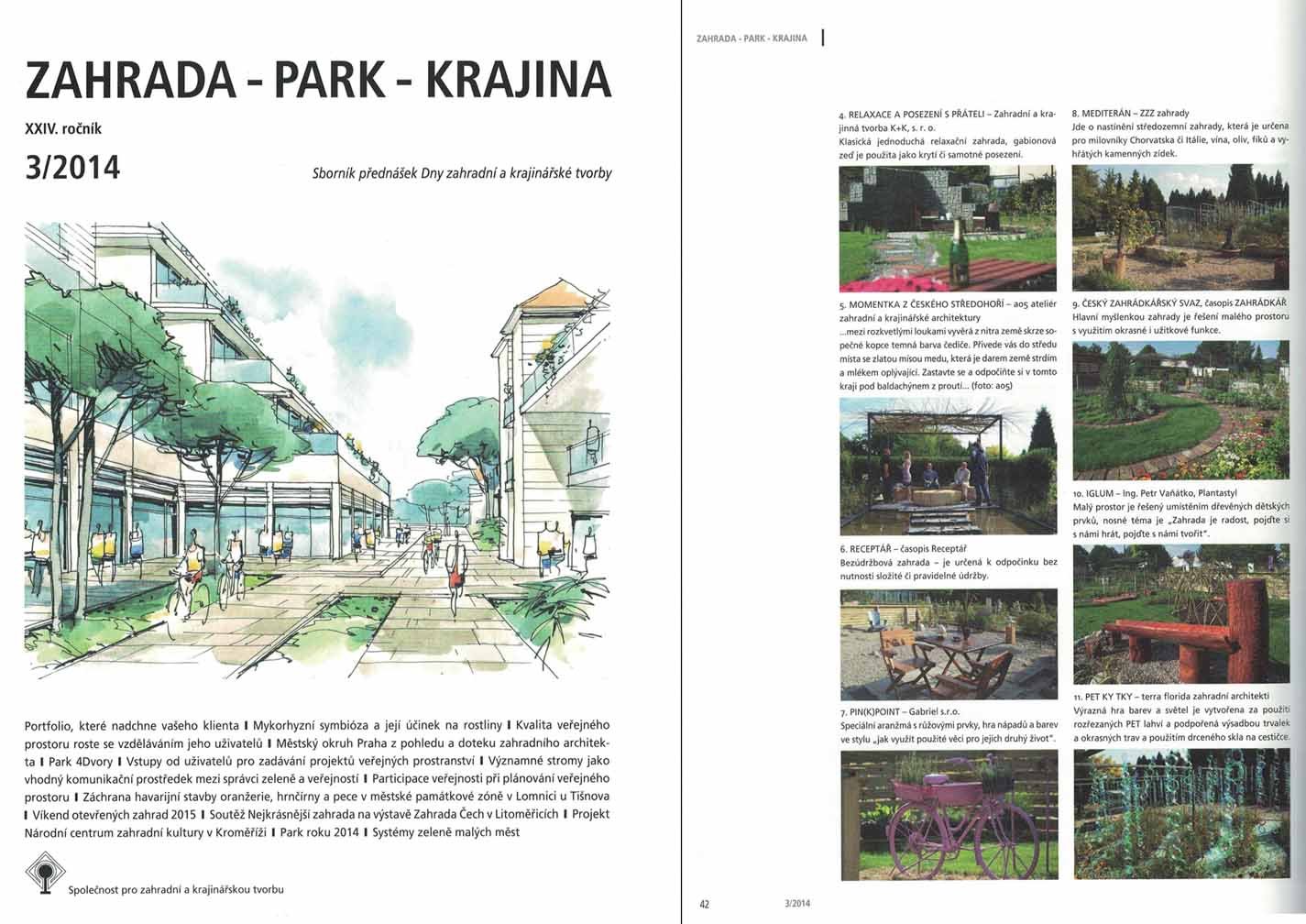 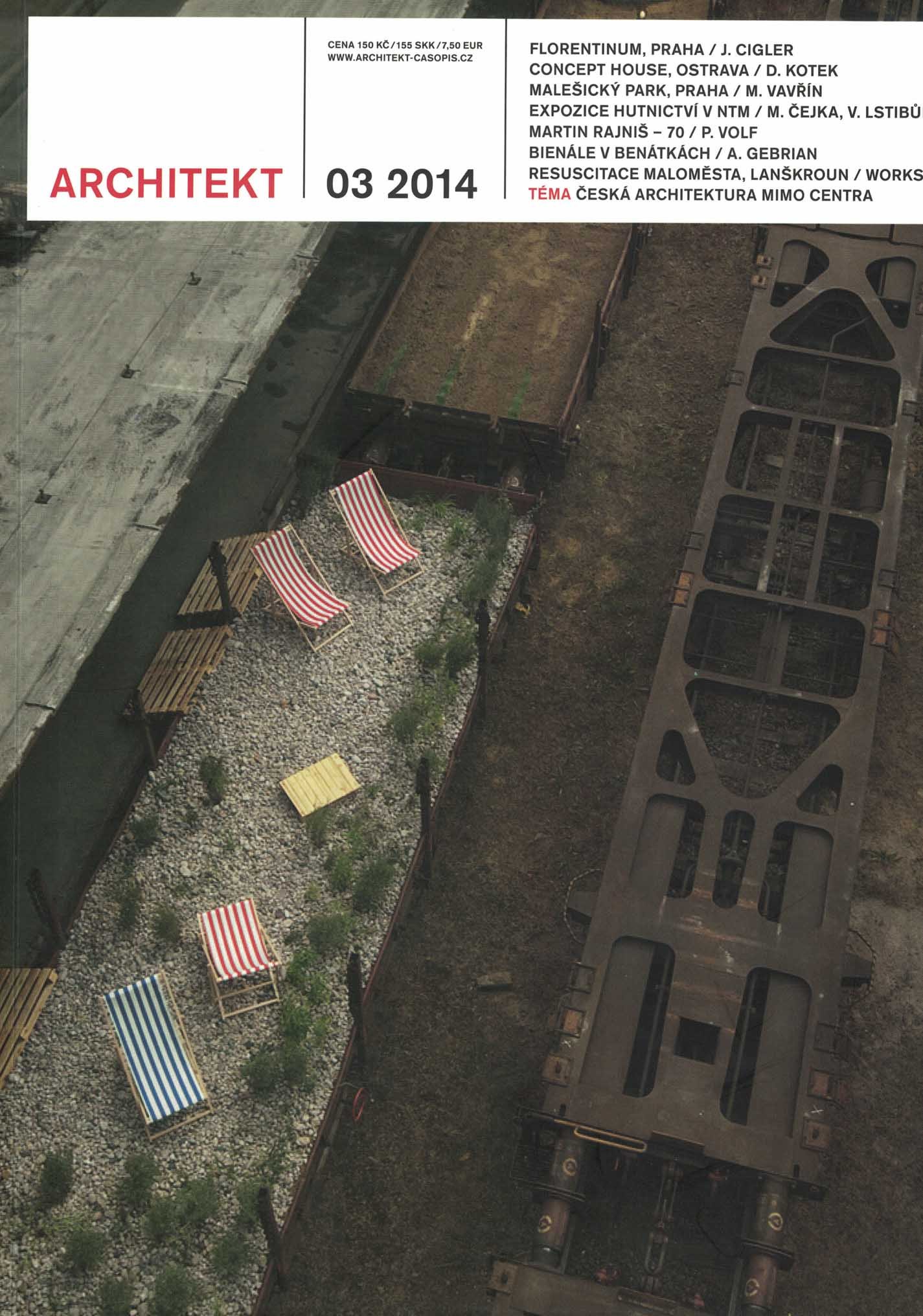 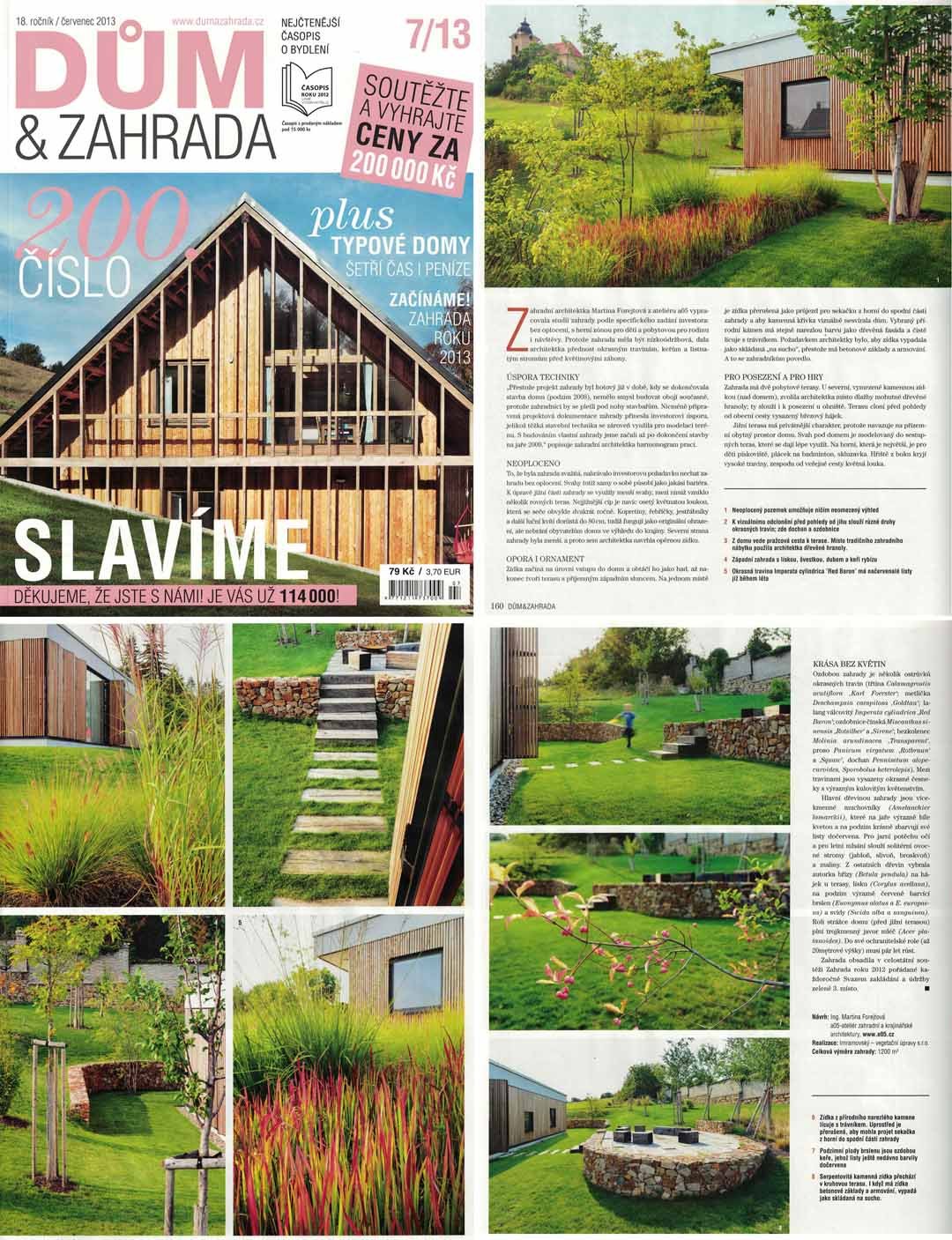 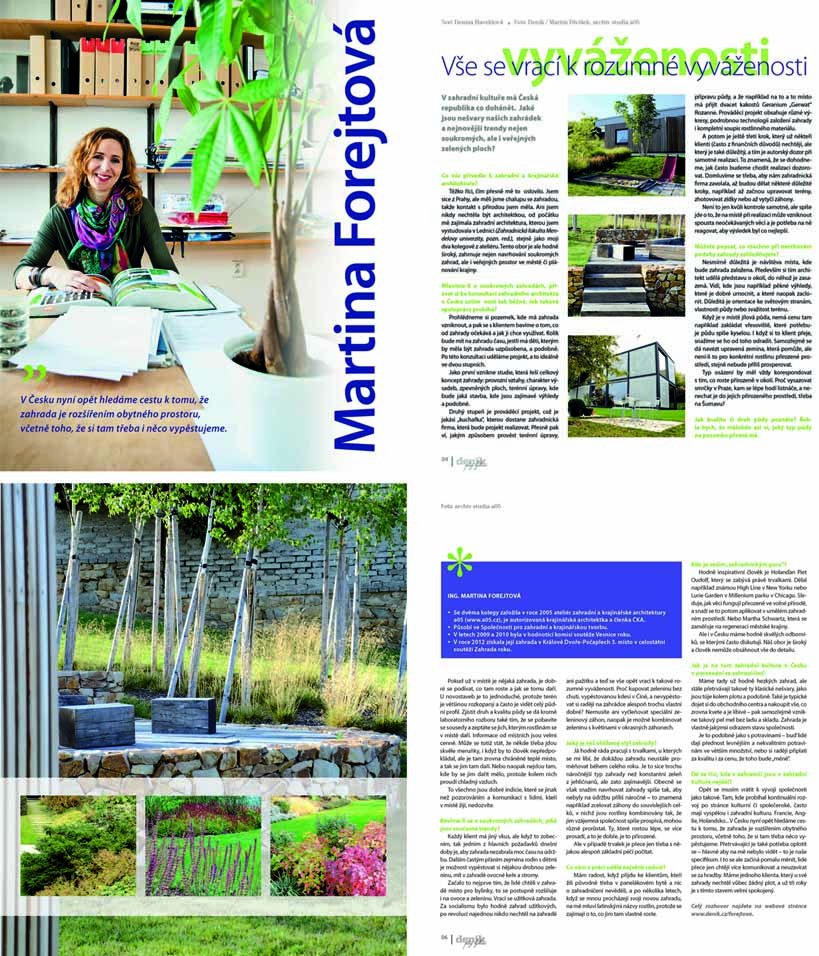 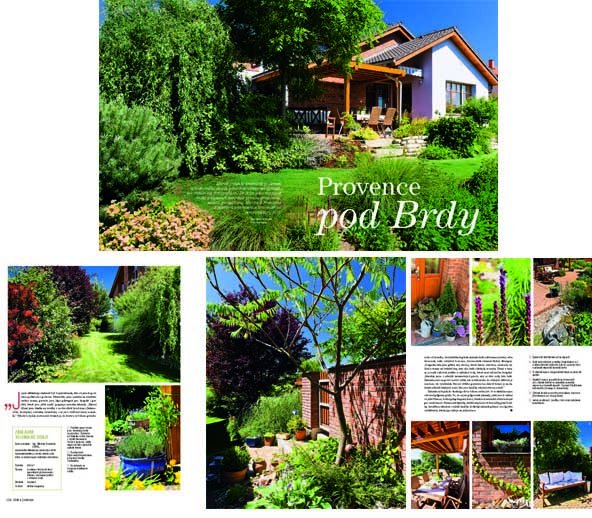 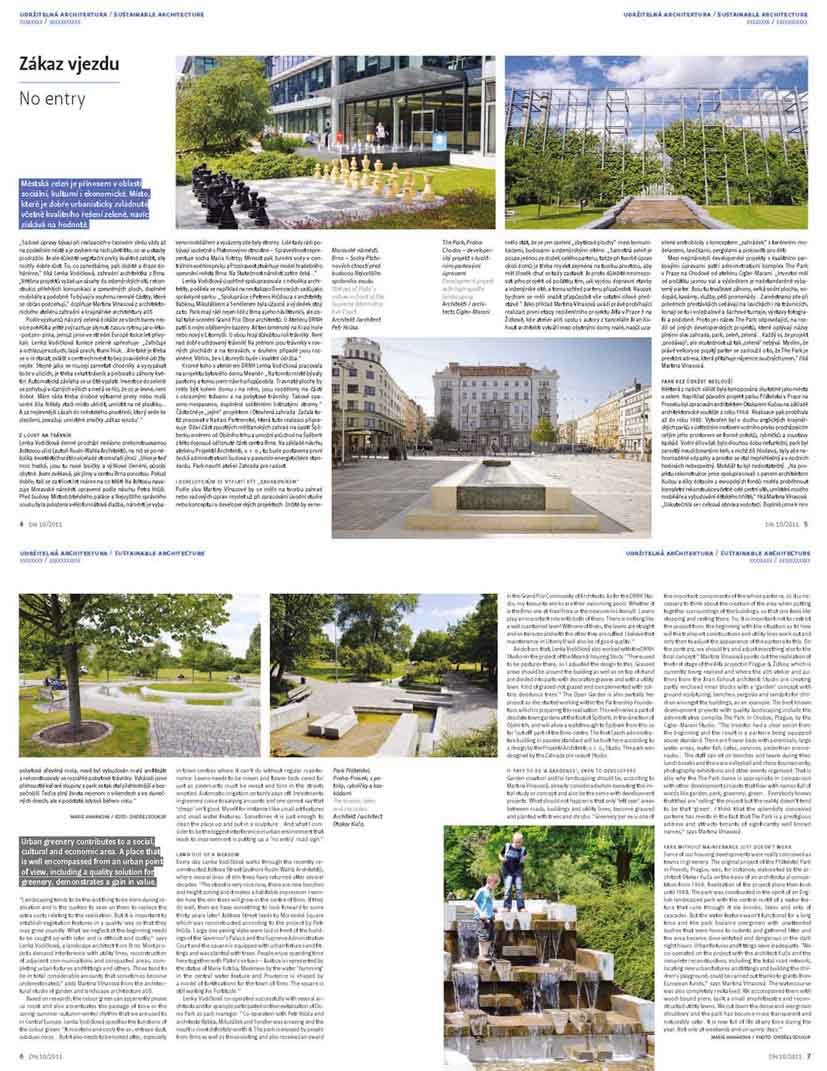